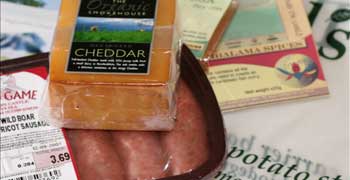 Arguably the main event when it comes to food festivals in Shropshire, this yearly event has attracted a huge reputation, both locally and nationally for more than a decade. The main event is located within the walls of Ludlow Castle and includes several huge marquees, filled with local producers and a few national names. As well as all the great food and drink on offer, there are also plenty of demonstrations and talks, repeated throughout the day. Most people come on Saturday and Sunday and it can be quite a task to get within buying distance of some of the more popular stalls. Best advice is to come on Friday, when the entrace fee is smaller and so are the crowds. Welsh oggies, rare breed meats, cider, perry. Outside the castle there is plenty going on too. The whole town embraces the event, including the fantastic local food shops, such as Bings Heath Smokery and Mr Moydens Handmade Cheese. Two very popular parts of the event are the sausage trail and the beer trail. It is best described as a sort of treasure hunt through the town, sampling the best local sausages and beer on offer. You are asked to vote as you go along, and you are helping towards the people's choice award. A bread trail has also taken place in the last few years.

This is the latest food festival to be added to the Shropshire calendar. Relatively small scale on its first year, but expanded significantly last year. Lots of stalls in The Quarry, giving food demonstrations and offering masses of local produce. A real celebration of local restaurants and food producers.

Running since 2007, the Ellesmere Food Festival is designed to illustrate the diversity of food in the region From small beginnings in 2007, its popularity saw it double in size in 2008. There is an impressive amount of quality produce, including local meat and vegetables, cheeses and fruits, and a whole lot more. The main focus of the festival are the market hall and town hall, though there is plenty more going on in the town itself. Entry to the event is free.

This event is organised by a number of local producers and businesses who want to showcase the town's and region's fantastic food heritage. Last year's events included a Real Ale Trail, a festival BBQ using local produce and lots of cooking demonstrations from local chefs. The event itself took place in the town centre on the three main streets - New Street, Bailey Street and Cross Street. Take a look at their website for a full list of events and exhibitors for 2016.

The location is the National Trust property Attingham Park on the eastern edge of Shrewsbury.

Below are a few notable food festivals in Powys, Cheshire and Herefordshire. You'll find some impressive regional produce from up and down the Welsh Marches at these events.